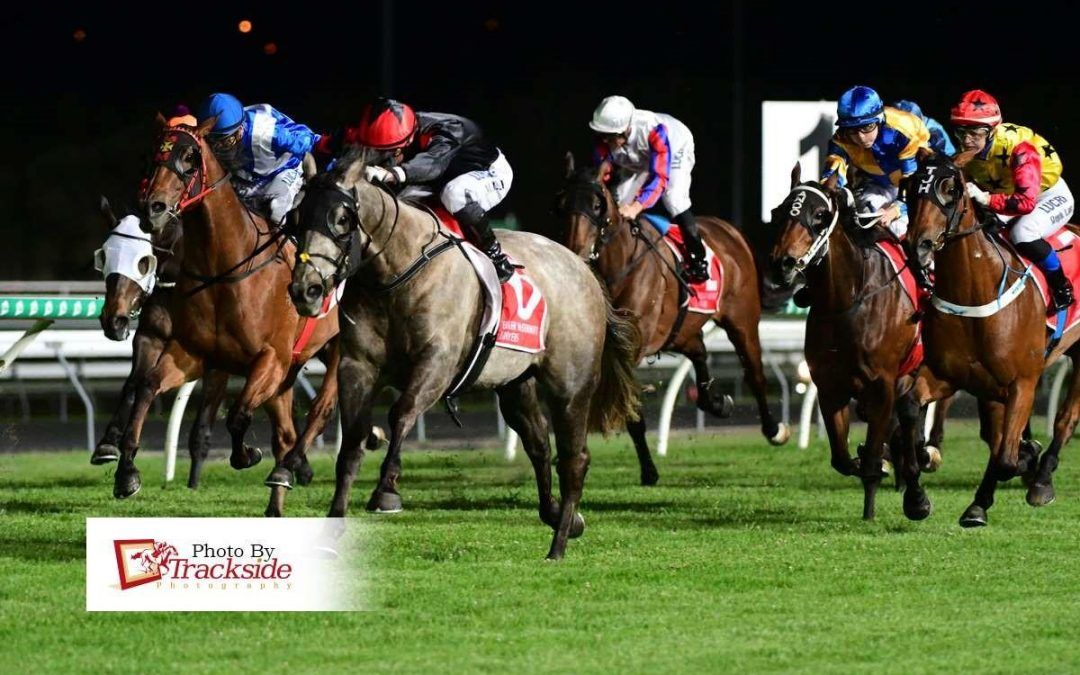 Tormino didn’t take long to announce his arrival in Queensland with a gutsy win at the Sunshine Coast on Friday night.  The lightly raced gelding by Reliable Man was having his first start for the Abbott stable and impressed all including his trainer winning first up over the 1800m journey.”To be honest I thought he would knock up the last 100m and I guess he did but he showed a good bit of guts to dig deep and hit the line even though he was spent,” Abbott said.

“I would have preferred to start him in the 1600m maiden at Doomben on Monday rather than the 1800m first up but when the rain came up here I knew I had to start him here and hope for the best because he really needs the soft ground to perform well.  It did help that he was aided by a terrific ride from Mark (Du Plessis).”

The little grey, originally trained by Ciaron Maher and David Eustace was purchased by Abbott via an Inglis Online Auction in September for $8000 and has instantly repaid his new owners back with the $11,650 winners cheque.

“I have always liked the breed and I love stayers so he really appealed to me as I think the breed get better with age as well,” Abbott said.

“Col (McKenna) owned him and he and my grandmother are cousins so we do talk a bit about horses and I’ve rang him a few times when he’s selling something and he says if I should buy it or not.  He told me yes buy him, he won’t make much and he’ll suit you and your beach work so I did.  I rang Col after he won and he and Janice were just as excited about him winning as they would have been if they still owned him.”

Abbott sited Nudgee Beach as a key factor to the gelding’s success.

“These European bred horses are such soft boned and he doesn’t have the greatest legs in the world so after I jumped him out Tuesday week he hasn’t been back to the track since and I’ve just swum him and done water walk at the beach since.  He’s bred to stay so it’s natural for him he doesn’t need to be pounding the hard training tracks everyday to keep fit and his win today has really given me confidence with my methods.  I believe in the less is more approach but with new horses it can sometimes be hard to gauge if you’re doing the right thing with them until you get to know them a bit better.”