Kievann Returns To Racing In Style 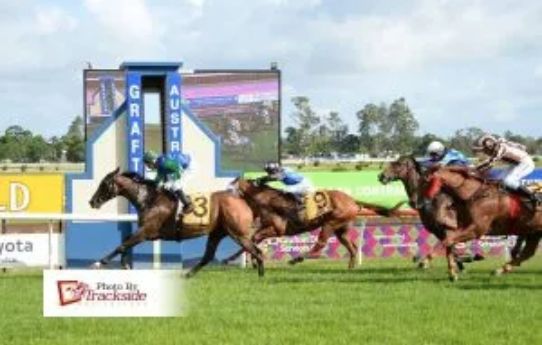 Veteran galloper Kievann gave his younger opposition a galloping lesson at Grafton yesterday when he returned to racing after an eight month layoff to take out the 2020 Yamba Cup. The nine year old notched up his 12th victory from start 63 and his career prizemoney tally crept to $466,000, a feat rarely seen in these modern times.  Trainer Lauren Abbott was thrilled to see her charge bounce back after a string of bad luck.

“It’s such a well deserved win for this horse as we’ve pretty much had twelve months of bad luck with him,” Abbott said.

“This time last year he hurt his back badly first up at Doomben after being so consistent the previous prep.  He had to do a lot of rehab and have three months off before returning to race.  We then headed to Townsville with him again to see if he could go one better in the Cleveland Bay only to cut his leg on some coral at the beach that needed surgery and another three months off.  Some of his owners questioned whether we push on with him or retire him but he just loves being a racehorse so I’m glad they listened to me and let me continue with him.”

Kievann was the first horse Abbott purchased when she obtained her trainers license and he arrived in Queensland with some very consistent Victorian form including multiple wins at Moonee Valley.  Purchased for $25,000 the rising 10 year old has now won four races for the stable including a gallant second in the Cleveland Bay Handicap, the most prestigious sprint race in North Queensland.

“He doesn’t owe us a cent and could easily have won double what he has for us with an ounce of luck,” Abbott said.

“Barriers have really been his undoing he rarely draws a gate.  He’s also tricky horse to ride and I was so lucky to be able to secure Andrew Mallyon today.  He used to ride him work at Flemington so he knew all his weird habits and how sensitive his mouth is.  Not many jockeys get along with him but he travelled so sweetly for Andrew and it really was the difference between winning and losing.”

“He’s a hard horse to place at times being an open handicapper but he isn’t out of place in a Saturday metro race.  He has won enough times at Moonee Valley after all.  He just needs to draw an inside gate and get a similar run like he did today and he will be highly competitive.”