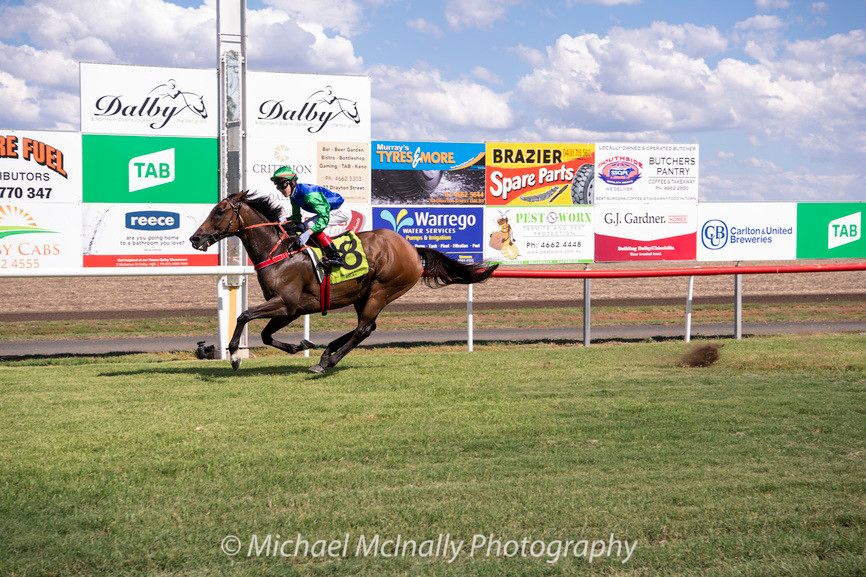 Kievann took his prizemoney haul to over half a million dollars when he won the Dalby Newmarket in spectacular style.  The ten year old, having his 81st start showed he still had what it takes to win, taking the feature event out by four lengths in a canter.
Trainer Lauren Abbott had nothing but praise for young jockey Zac Lloyd who produced a 10/10 ride on a horse that can sometimes be tricky to ride.
”There’s a bit of a knack to riding him and he can be hard to get on with,” Abbott said.
“He can overrace pretty easily and if the speed is on like it was today and the jockey can ease him in just behind the speed he settles a lot better and Zac managed to do exactly that from a tricky draw.  It’s hard to believe he claims three kilos as he produced a seasoned riders ride.”
Jumping from barrier seven, Lloyd managed to ease over to sit just behind the speed with a lapful of horse.  Rounding the home turn he popped out and asked for an effort from the 13 time winner and the race was over from there,  adding the Dalby Newmarket to his silverware.
”Funnily enough I had him entered for this race last year when he was first up from a spell.  He drew wide so I scratched and went to Grafton for the Yamba Cup the following week and he won.  He’s been in work that whole time but he loves it.  He doesn’t go to the track much and loves his beach work and that’s why he can stay interested for so long.”
Kievann has now won 14 races and a further 17 placings a for $508,035 in prizemoney. 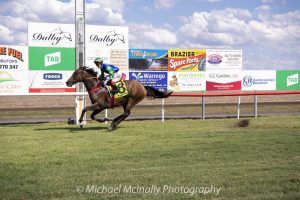