Mort Doyle showed he’s no flash in the pan when he secured his third straight victory and his first metropolitan race at his first attempt at city grade.  The lightly raced five year old dominated the handy sprint field that lined up at Doomben, leading from barrier to box for a dominant two and a half length victory in a slick 1:00:36 for the 1050m journey.  Jockey Andrew Mallyon was impressed with son of Denman and believes he still has improvement to come.

“I rode this horse a few starts back and he did a lot wrong,” Mallyon said.

“He wanted to over race and hang and still didn’t really know what he was doing.  I know Jimmy (Orman) does a lot of work with this horse and Lauren and Jimmy decided to take the blinkers off him a couple of starts ago and it’s really helped him to relax.  I think he’s the sort of horse that will just keep improving as he gains more race experience and understands what his job is.”
From 12 starts Mort Doyle has now won four race and placed a further three times and so far securing his owners $68,850 with his best definitely yet to come. 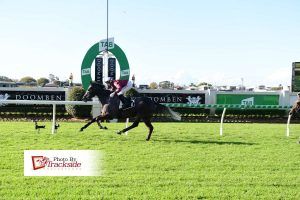