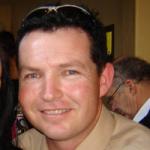 Horse racing has been in Brad’s blood since the day he was born. His father was a jockey for several years until turning his hand to training and he learnt the fundamentals from a very early age by following his Dad like a shadow. As soon as Brad was old enough he began his apprenticeship with astute trainer Max Lees and rode successfully for two years until weight forced an early retirement.

Brad continued his heavy involvement in racing as foreman for Newcastle trainer Darren Smith and then Sydney trainer Tim Martin. He learnt what it was like to be in high pressure situations having horses such as Exceed And Excel, Gonski and Storm Hill in his care. Brad’s position at Martin’s led to the opportunity to travel to Brisbane, with a team of horses. The horses went home but Brad wanted to stay in the town he’d spent many years as a kid. He was approached by Liam Birchley to become his foreman and spent two years there. Birchley’s stable had great success in those two seasons, with Liam winning the Jim Atkins Queensland Trainer Of The Year in the 2007-08 season and the next season he has had great success with many up and coming racehorses including Paprika.

Brad felt the time had come to take the step and train in his own right and took the plunge during the 09/10 season. He trained his first winner within eight weeks of getting his licence and has already trained numerous metropolitan winners and many placegetters, quickly gaining a reputation as one of Brisbane’s most promising up and coming trainers.

One of Brad's greatest attributes is to be able to turn around the form on tried horses or under achievers. Many horses have come through the stable that are one step away from being retired and Brad has managed to find a new lease of life in them. Some of these include:

Bell Academy: Hadn't won a race in 18 months and went on to win three metro races in Brad's care

The Black Superman: Went from a well tried maidener to a Saturday metro winner in one preparation at Herne Racing.

Gojo Mimo: Six starts and still a maidener. Went on to win five races from nine starts including a Saturday metro win and numerous placings once joining Brad's stable.